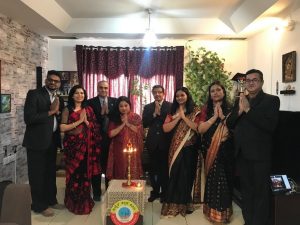 The last event of the year 2020,annual general body meeting titled”poorna sankula” was held online on december 25,2020.vice president mr .sandeep chabba welcomed the audience online.next in line was the lighting of lamp by the executive committee members along with their better halves.the members of the various committes of 2020 who toiled the entire year were felicitated with a memento.the executive committee of the year 2021,with mr revanasiddappa hombali as president,mr vikram kunjibettu as vice president ,mr yogeesha jayaramu as secretary and mr .sreenivasa kshatriya as treasurer were elected unanimously.ex president of the koota dr.shashikiran prabhu was the election officer for the day

The most anticipating announcement of the winning house for the year 2020 was declared and ‘hemavati’ emerged as the winner.team ’kaveri ‘ was declared the runner up.the president shri.rajesha vittal briefed the audience on all the activities conducted by the koota in the year 2020.the annual report  on the activities and finacncial expenses of the year were presented by the secretary mr.praveen shetty and the treasurer mr.pradeep rao respectively.the program was well co-ordinated and hosted by mrs.vidya vittal,mrs.reshma sandeep,mrs.rashmita praveen ,mrs bhamini pradeep,ms.varshini,ms.roshni and ms.anusha .

“nage lahari”, a stand-up comedy by the trio of mr. Pranesha gangavati, mr. Basavaraj mahamani and mr narasimha joshi kept the audience engaged for the evening.evening concluded with a vote of thanks by mr. Praveen shetty.

In the trying times of the pandemic getting sponsors to bear the expenses incurred for the programs seemed impossible.all the sponserers who had promised backed out on the onset of the pandemic. But our dynamic president, vice president and the finance committee headed by mr. Karthik gowda managed to bring in sponsorship amidst the uncertainities too.hats off to their efforts.this enabled us to give our members a voucher of 20kd per family and all thechildren who toiled for our online rajyotsava 10kd at the end of the year.

2020 posed innumerable unforeseen challenges to us.but to keep the show going on the executive committee and all other committes put in their hearts and souls to carry on the legacy of the koota ahead.it is because of   the  efforts of all these people and the wishes of our wellwishers that we were successsfully able complete our tenure of the year 2020 and pass over the reins of the koota  to the upcoming committee of 2021.we wish that our kuwait kannada  koota’s flag roar  high in the horizons.