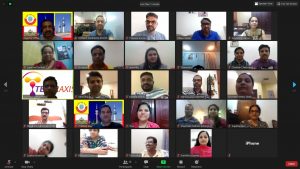 As the pandemic wasn’t exhibiting the signs of ceasing down ,the dilemma we faced was as how to conduct the biggest annual event of the koota ‘rajyotsava’.however our ever enthusiastic cultural committee led by mrs .spoorthy shenoy and technical committee led by mr kiran bhat volunteered to take up the tremendous responsibility of experimenting rajyotsava online on november 6th 2020.the program comprising dances,song and drama was shot individually at homes and then merged to give a look of an onstage program.

However the demise of h.h sheikh sabah al-ahmed al sabah,the monarch  of kuwait led to the postponig of the event.eventually on november 20,2020 kuwait kannada koota witnessed the first ever online rajyotsava titled’e-rajyotsava’.we were previliged to have padmashree dr.doddarange gowda as chief guest amongst us.sandalwood stars mr. Upendra and ms.nimka ratnakar graced the occasion as guests of honour.the program that was anchored by mrs preeti shetty and mr tarendra shettigar  was telecasted on zoom and youtube and garnered  appreciation from kannadigas worldwide. Thanks to the souvenir committee headed by mr.uday varnekar,the souvenior of the year was released by dr dodda range gowda online. Kudos to the members of the koota who presented a mesmerising program and the cultural committee and technical commmitte foremostly for making what seemed to be an impossible task a reality.